interactivity is the way things communicate be it person to person, person to environment, or even person with technology.  It most simply put it is how things communicate with other things and the effect they have upon each other.  This is not a one way street however, because there must be two things for this to work.   I would say that talking is a form of this but there must be a listener as well otherwise this doesn’t occur.  This reminds me of a game I play when i spot someone on the street talking with what appears to be themselves.  The game is called blue tooth or crazy.   and it is played by seeing someone talking to themselves at a distance and trying to determine whether this person is talking on a bluetooth or simply just talking out loud to his or herself.  In terms of interaction within this programs contexts i would say that interaction has to do with programs taking to one another and how we as people use and communicate with and through these objects.  communication in this way could be done through text, images or even the steps we take to make these things happen.  I would try to break things down to their root words normally when thinking about these things but i was unable to find a suitable break down other than action between two things and this seems far too vague of a definition to actually gain any benefit from it. 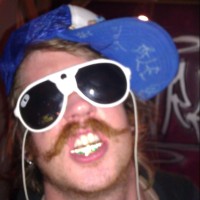